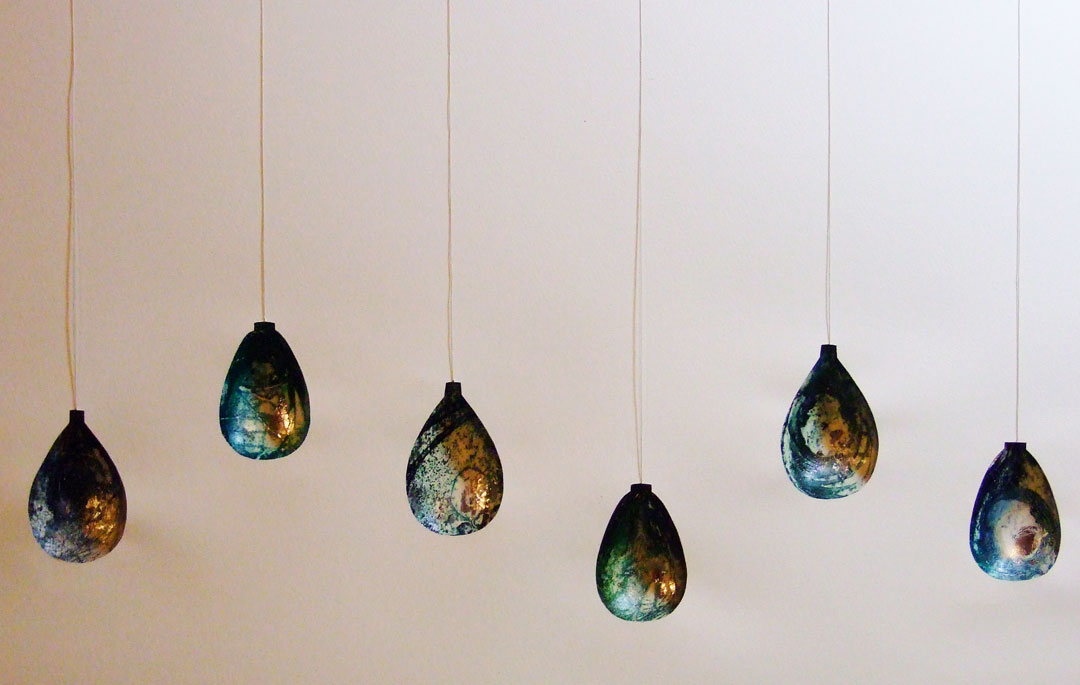 Inkers Printmakers spent two years as artists in residence at Bradford Industrial Museum between 2013 and 2015. We explored the collections and each printmaker created a body of original work inspired by different aspects of the museum. The residency included workshops and demonstrations, and culminated in a big group exhibition in the gallery at the museum.

I started off by looking for signs of the people who had worked in the mill; I became intrigued by the marks they had made; I found gouges from metal boot studs, scratches made by moving parts scraping across surfaces, and graffiti; a man on a horse and a pin-up girl, as well as initials and geometric patterns which (it is said) were to keep witches away.

I had a ‘that’s it!’ moment when I discovered an article on an 8000 year old loom weight inscribed with ancient marks which archaeologists think are a form of Neolithic writing.

Loom weights and spindle whorls were both useful and sacred, since weaving was thought to be a gift from the goddess. They were often made from precious stone like amber or coloured marble, and would have been valuable objects handed down through the generations.These prints explore loom weights with intentional and incidental marks. I wanted the prints to look quite 3d, glowing and mysterious.

The point of counter-balancing weights is weightlessness; some of these prints are hollow and as you look at them they seem to hover between convex and concave – moving between weight and weightlessness, when it shifts in your mind’s eye it seems to swing a little bit!

I also invited fellow printmakers to scratch anything they wanted onto small squares, using files, nails, knives and other tools at hand. The idea was to catch the spirit of people scratching marks into things, as workers did at the mill, or ancient weavers did on their weights. I printed these and they form one of the the 3d concertina books. 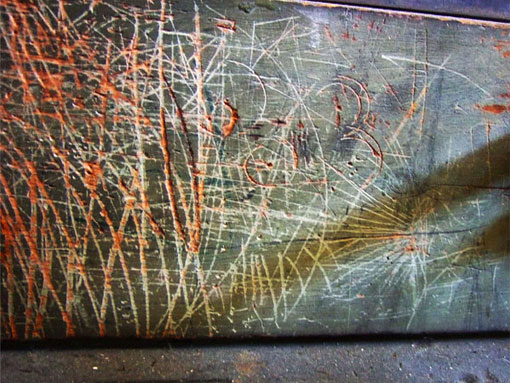 Marks left on the wooden looms – some were just made by working the looms over the centuries, others are deliberate good luck symbols or graffiti by bored or lovesick weavers!

During an artist’s residency exploring the place generally leads to one aspect taking on particular significance. For me it was these little lead weights, each one individual but all working together. 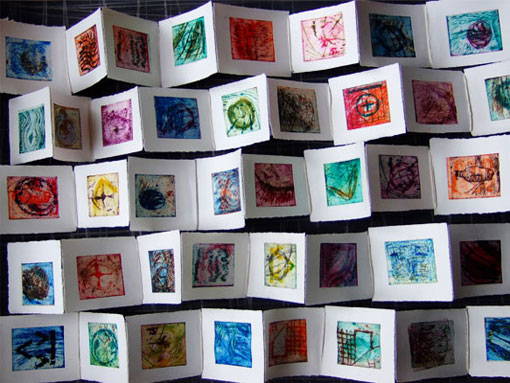 The plates for these tiny prints were made by different printmakers as scraper board etchings. The structure of this undfolding book reflects the punch pattern cards and repetition of the working looms. 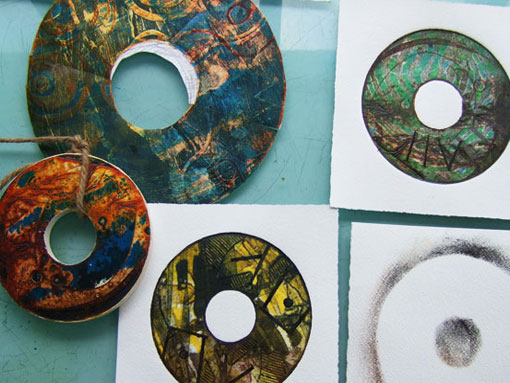 Experiments with casting plaster prints and hanging them. (I decided not to do this in the end.) 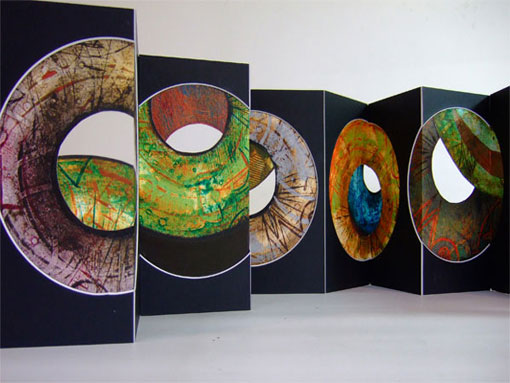 A concertina book becomes a sculpture with offset holes breaking the folds. 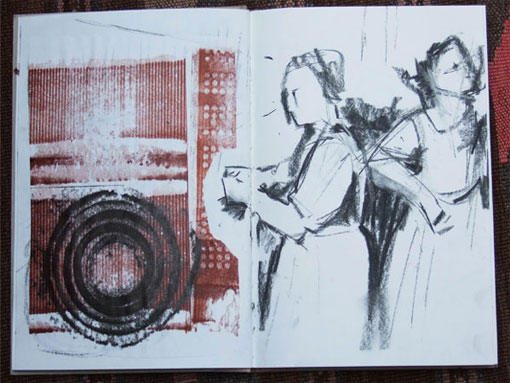 Sketching in the museum

We spent time sketching and printing in the museum. This involved conversations with visitors and staff, some of whom had worked there when it was still a textile mill. 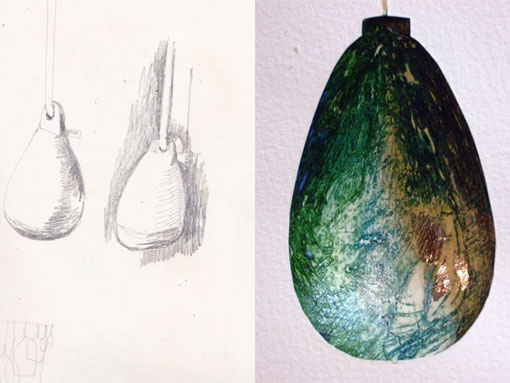 3d prints of lead weights; cast prints in plaster with added silver leaf. The weights are actually cocave but appear to stick out and hang infront of the paper, moving with the viewer. 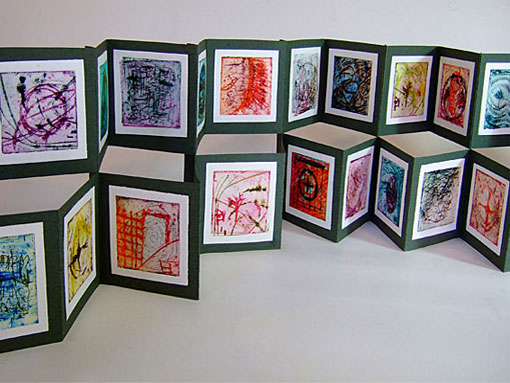 The little scraped prints were finally displayed as a double height concertina book. 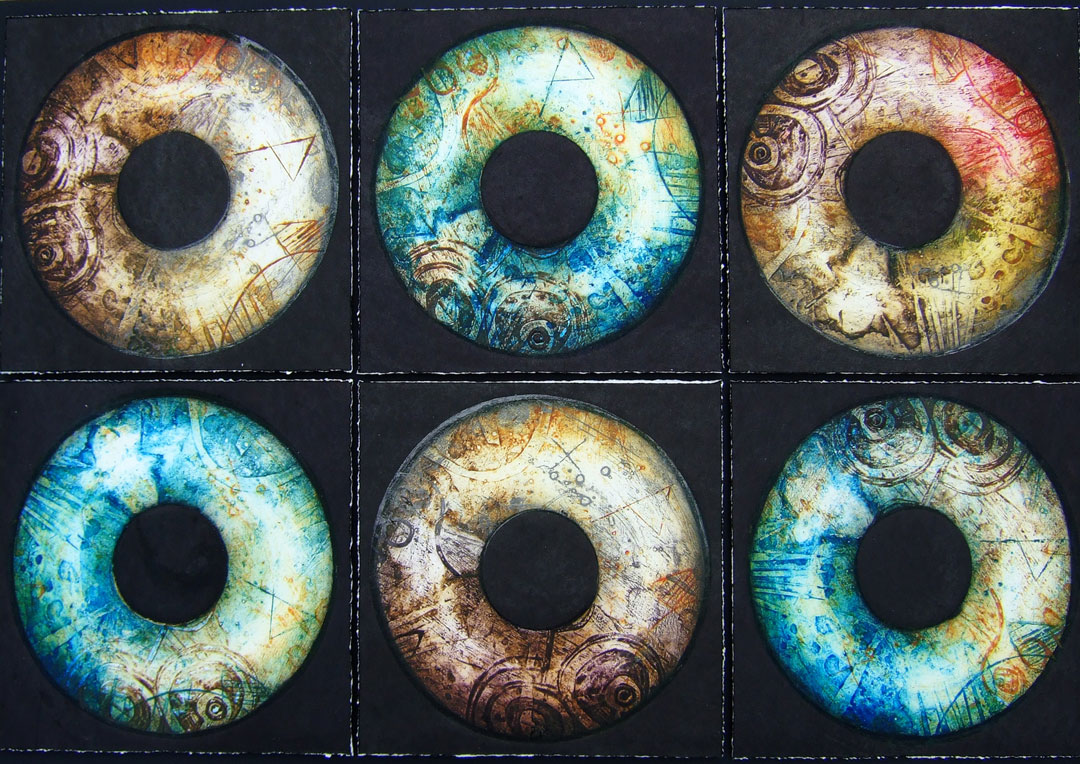 The final print; a collagraph plate overprinted several times. I wanted to create a sense of mystery suggesting the special object emerging from a distant past. 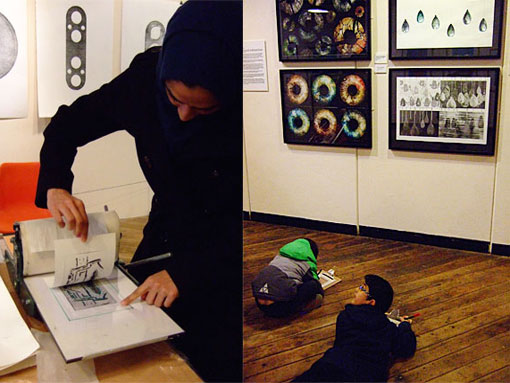 Printmaking workshops at the museum

Visitors were involved with workshops to explore the concluding exhibition. The six loom weights print was a favourite with them and became known as ‘the donuts’!

Inkers Printmakers ran a group residency at Bradford Museum; we spent two years working with the collections there. My focus was exploring loom weights, both ancient and historic, through sculptural prints and concertina books. The final prints measured 80cm x 60cm and used a mixture of Collagraph techniques. For more information please click below.

This site uses Akismet to reduce spam. Learn how your comment data is processed.